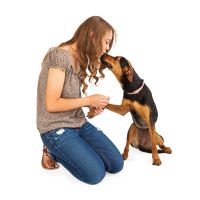 New research shows dogs can form abstract mental representations of negative and positive human emotions and recognize how their owner is feeling.

They are the only creatures other than humans which apparently have that ability.

Dogs are also good at recognizing each other’s emotions.

Seventeen domestic dogs in the experiment were shown pairs of pictures, either of a person, one happy, one angry, or of a dog looking playful or aggressive. They were then played sounds of playful or aggressive barks or a person’s voice saying “come here” in either a cheerful or angry tone.

The scientists found that the dogs tended to look at the picture matching the tone of voice, and were able to pick out the right human facial expression more often than not.

Click the link below for full story (opens new tab/window):