How to Stop a Puppy From Biting

Watching and interacting with a growing puppy is lots of fun filled with much joy, laughter and wonder. This is true until the puppy learns to bite. When this time comes you need to know how to stop a puppy from biting.

If this mild form of aggression is not checked at this early stage, it will cause interaction problems in the future. And with how fast the little pup is growing he will soon have strength enough to hurt.

Exercise your dog well before each training session if you can (he will be more attentive), be gentle and patient in training, reward him for good results, and you will build a solid, beautiful relationship with him.

Here are some easy steps you can take to nip this biting behaviour in the bud (pun intended).

How to Stop a Puppy From Biting – Tips and Tricks

Just like children, puppies learn many boundaries by interacting with each other as they grow. Introduce him to pups or dogs owned by family and/or friends, providing you are fully confident their animals have been vaccinated, and let them play together.  If you don’t have any other dogs or puppies for your little guy to interact with, you could always enrol him into a puppy class.

Ideally, let him engage with playmates his own age, and he will learn important life lessons. This interaction helps him learn when he is being too rough with his playmates.

The reason this is helpful is because when they are playing and a puppy bites another puppy, causing discomfort or pain, the other puppy will yelp and back away. This will startle the aggressive puppy and both puppies usually quieten down.

After a while play resumes with the repeated behaviour of drawing back if it becomes too rough. This usually helps a growing pup to know how much care to take when using his teeth at play. It will also help you learn how to stop your puppy from biting.

Role Play As a Puppy

As your puppy interacts with other pups and older dogs and learns boundaries at play, he will also learn the signs that mean he’s gone too far. The signs that will teach how to stop a puppy to stop biting are yelping and withdrawal.

Since your puppy looks up to you, it might not have registered with him that you could also get hurt. So his rough play may continue if you do not give him signs to show that he is hurting you. Believe me, his needle like teeth digging into your hands or nipping at your ankles every time you show him affection are painful and a real nuisance to you, ruining your enjoyment of your pup.

Learning how to stop a puppy from biting will let you enjoy your dog much more. So, every time he bites at you, yelp as a dog and look downcast while making your hand go limp. This will show him something is wrong, because he has learned what that sound signifies. Do this a maximum of three times in a fifteen minute session each time so he can learn.

If yelping does not help much by itself, incorporate withdrawal after yelping. Withdraw yourself from him, or put him in another room.  The withdrawal should last around 20 seconds only, but will send a clearer message that you won’t allow his behaviour. After that, resume what you were doing with your puppy. He will soon learn to associate your withdrawal with biting and will stop biting.

Replace Hands With Toys and Activities

Since your little bundle of energized joy has always known your hands as your point of interaction, it will also be natural for him to be drawn to them to play with them.

Another lesson to learn on how to stop a puppy from biting is to show him your hands are not playthings.  Have a toy nearby every time he starts to get excited with your hands. Captivate his attention using the toy and show him he should play with it. 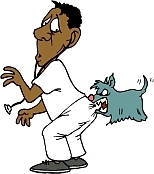 I’m not a fan of tug-of-war games, even though many dogs love them, because I believe it can foster aggression in your pup. And, if he wins the tug-of-war, as he often will, your own alpha dog status could be lost resulting in other bad behaviours from your pup.  You or a visitor for example, could be bitten by accident in the “battle” for the toy with serious consequences.

We taught Freddy to drop his toy, back away, and sit waiting for the toy to be thrown for him to chase. That way I, or someone else, can pick up the toy with no risk of him lunging at it to fight me for it and maybe biting me in the process. He has learned that the game stops unless he drops the toy, backs away and then sits or lies down, waiting.

These two actions work wonders to help you learn how to stop a puppy from biting, by helping your cute doggy know when he is doing well. When he stops biting you and shows he is sorry by licking and comforting you, pat him and praise him. You can also offer him a treat then.

But, be careful not to use the treat as a distraction from rough play, because he might associate it with biting and excitement. Also, remember never to use force or to lash out because he won’t understand and this might cause him to be more aggressive, or even cause him to be passive – against his nature.

Freddy and I hope we have answered your question ‘how to stop a puppy from biting?’