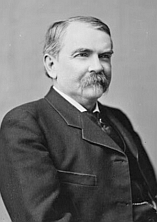 George Graham Vest served in the United States Senate for twenty-four years, from 1879 to 1903, but the act he is best remembered for is a speech he gave called “Eulogy of the dog” delivered in an insignificant court case while he was still a lawyer in rural Missouri. His words are said to be the origin of the phrase “The dog is a man’s best friend”.

Freddy and I love to read this passage, because we are dedicated dog lovers, and the words are so true.

Born in Kentucky in 1830, Vest moved in the 1850’s to Missouri, where he practised law and served in the state legislature. During the Civil War, he was a member of the Confederate Congress. After the war, he practised law until his election to the Senate as a Democrat.

Gentlemen of the jury—
The best friend a man has in the world may turn against him and become his enemy.  His son or daughter whom he has reared with loving care may prove ungrateful.  Those who are nearest and dearest to us, those whom we trust with out happiness and our good name, may become traitors to their faith.  The money that a man has he may lose.  It flies from him perhaps when he needs it most.  A man’s reputation may be sacrificed in a moment of ill-considered action.  The people who are prone to fall on their knees to do us honor when success is with us may be the first to throw the stone of malice when failure settles its cloud upon our heads.

Gentlemen of the jury, a man’s dog stands by him in prosperity and in poverty, in health and in sickness.  He will sleep on the cold ground when the wintry winds blow and the snow drives fiercely, if only he can be near his master’s side.  He will kiss the hand that has no food to offer, he will lick the wounds and sores that come in encounter with the roughness of the world.  He guards the sleep of his pauper master as if he were a prince.

When all other friends desert, he remains.  When riches take wings and reputation falls to pieces, he is as constant in his love as the sun in its journey through the heavens.  If fortune drives the master forth an outcast into the world, friendless and homeless, the faithful dog asks no higher privilege than that of accompanying him, to guard him against danger, to fight against his enemies.

And when the last scene of all comes, and death takes his master in its embrace and his body is laid in the cold ground, no matter if all other friends pursue their way, there by his graveside will the noble dog be found, his head between his paws and his eyes sad but open, in alert watchfulness, faithful and true, even unto death.

The lawsuit that brought him this immortality concerned the shooting of “Old Drum,” the best hunting dog of a local farmer. A neighbour who suspected that Old Drum was moonlighting by killing his sheep gave orders to shoot the dog if it appeared on the property again. When Old Drum was found dead near the neighbour’s house, the farmer filed suit, seeking damages of fifty dollars. After a jury awarded twenty-five dollars, the neighbour successfully appealed the ruling. The dog’s owner, however, succeeded in his motion for a new trial and hired two skilled lawyers, one of them George G. Vest.

Vest’s summation to the jury at that trial has become familiar to dog lovers across the country through succeeding generations.

Rather than discussing the details of the case, he eloquently praised the loyalty of a dog to his owner in terms that brought tears to the eyes of the jury and of those who have read his brief remarks in the years since. As a result, the owner was awarded damages, although the amount, whether the original twenty-five dollars or much more, is unclear.

Afterwards, the speech took on a life of its own, being reprinted both in this country and abroad and was identified as the origin of the quote regarding “Man’s Best Friend”. So famous did it become that, in 1958, the town of Warrensburg, Missouri, where the speech took place, erected a bronze statue to honour Old Drum and George G. Vest.

Over the years, the brief oration has been included in a number of anthologies, often with slight variations in wording and punctuation. The version presented here was inserted in the Congressional Record as part of a speech delivered by Senator Robert C. Byrd on April 23, 1990.

Freddy and I hope you have enjoyed ‘The Dog is a Man’s Best Friend’.